It looks like you're new here. If you want to get involved, click one of these buttons!

Need some help? Check out our new Help Centre

Jeffery Woodcock
July 2015 edited July 2015 in PicEngrave
First we opened MS Paint and by default, it creates a white page. We saved and named the image to a folder, then opened it in the PicEngrave Pro 5 image editor. We then selected "Auto" sizing and set the "Pixel Resolution" at .006" (.1524mm) we use for the EmBlaser's step over and step ahead axis gcode moves.

We then un-selected the "Preserve Aspect Ratio" so we can change the width and height size independently for adding text to it later. The first was sized so we could add the lower text in our engraving to it, then saved it. We then re-sized it again for the upper text in our engraving and save it as a different file name and then exited the image editor.

In PicEngrave Pro 5 main page, there is an "Add Text" button. The first blank white page we saved was opened for adding the www.picengrave.com text to it. You can select font & size, colors and position of the text there. We added the text to the first blank page we created and then saved to a different file name. The second blank page we created was then opened and the PicEngrave Pro 5 text was added to it, then saved to a different file name.

We are going to use TTL (pulsing) with this engraving because the illustration of the automobile is B&W line art and we wanted the text to be just B&W also. All 3 images will need to be Dithered separately in the PEP5 editor.

The Line Art image is opened first for sizing and then saved, then opened again for dithering. We used the "Atkinson" with the default setting. When the PEP5 image editor Dithers the image and saves it, it adds the word "dithered" to the end of the original file name. The two text images were then opened one at a time, Dithered, then saved.

We then selected the Skip White Background to optimize the tool paths. Since we are creating three separate gcode files, they will be optimized independently so the outer border white areas of each, will minimize the movements to save on engraving time.

The three files were generated with the "Initial Image Zero" at "Lower Left", but with different X&Y "Start Positions" to place them correctly and centered on our piece of Poplar wood we used. The www.picengrave.com text & Line Art image, we did not select the "End with G28", but we did with the PicEngrave Pro 5 text because it will be engraving last.

We opened up all three of the engraving gcode files in Notepad, then copied the second gcode command lines and pasted to the end of the command lines in the first file, then did the same with the third gcode file after the second files command lines. The comments of all three were included also, but will be ignored when running the file because of the "(". Now there is three separate gcode files combined into one and then saved to a different file name.

Here is what the optimized tool path looks like in a gcode viewer.

Here is a video of it engraving towards the end. 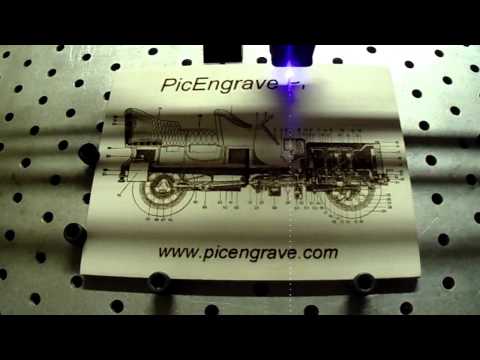 Here is the finished engraving. Even the very small numbers in the Illustration image is readable.

If anyone wants to test this nc file on there EmBlaser, here is a download for it in inch units.

The possibilities with our PicEngrave Pro 5 program are endless!